Every now and then I’ll be doing something and a long-forgotten memory floods my mind.  You, too?  Often, it’s something I’d just as well leave forgotten.  You, too?

But sometimes, a memory takes me back to an experience that was fun and so worth remembering.  A memory that wraps around me like a warm hug.  Such a good feeling.

A few days ago when I was putting on my hearing aids, my mind very quickly went back to a scene in my childhood living room.  Our living room was so very tiny.  Maybe 10 X 12.  But my dad had trouble hearing the TV even though it was perhaps 6 feet from where he was sitting.    He tried hearing aids but back in that day the loud whistling coming from the aid totally ruined any value to wearing them.   It was very discouraging to him, and now…. oh how well I understand his discouragement.

He was a creative sort of fellow, always trying to make things work some way, some how.  So he disassembled an old radio and took out the speaker.  And he bought enough of the right type wire to reach from his  favorite comfy chair to the back of the TV.  All six or so feet of space.   Remember, we’re talking the 1960’s here…. there probably was no “audio in/audio out” type deal on the back of the TV.  No surround sound, no handy soundbar.  Certainly no sub-woofer.  No remote control, either.  And black/white picture only.  With no closed caption option.  The good old days?  Uh…..nope.

But Daddy coped.  Sort of a necessity/invention type dealio.  He soldered the wire to something on the ???  speaker?? Back of TV??  I can’t quite recall.  Then he held the little speaker up to his ear.  Bingo.  Not only did he solder it, but he taught me to solder it.  Yes, he armed me with a soldering gun.  😳😜 No danger that I would “shoot my eye out”.  I didn’t even sustain any burns to skin.

Why did I need to learn this skill?  Well, he could be in the middle of watching his favorite show when the wire would come disconnected.  “Bunny, would you solder this back while I sit here and hold it just right on my end?”   And right then, right there, I’d drop everything to go use my mad skills.  And he would hold the old radio speaker up to his “good” ear to let me know when he could hear the TV again.  Then I could cease the soldering and go back to whatever I was doing.

Not every little girl is lucky enough to learn the art of soldering wires at such a tender age.  But of course it was a skill that wouldn’t really take me far.  Certainly not a resume builder for a girl in those days.

Speaking of resumes, for all 43 years of employment, I had only one professional skill on my resume.  My career origins come from another long-forgotten memory.

I’ve talked about my dad’s leukemia often.  I was 15 when he was diagnosed.  Mom worked.  She really had no other financial option.  There was no long/short term disability plans back then.  Or FMLA.  I’m not sure she had any paid time off.  My dad worked for the county highway department which was very low pay.  Thus, no real savings account either.  I think they had health insurance, but when dad got sick he had to quit work so I’m just not sure about that part of the story.  Regardless of any of the details…. we were poor.  Dirt poor.

So Bunny became Daddy’s transporter when he needed one.  His doctor ordered radiation treatments for the swollen areas (tumors? lymph glands?) in his neck.  Chemotherapy wasn’t an option yet.  It was 1970.  We lived in a very rural area.  No cancer specialists available nearby, certainly not when you were poor.  In retrospect it seems odd to me that he received radiation for leukemia, but he did.

Often, very often, I would drive my dad to the hospital in Salina for his radiation treatments.  Age 15-17.  Adulting at a very young age.  But these trips became a memory to me that I wouldn’t trade for all the money in Ottawa County.  I would take him to the Cobalt treatment area and wait while he received treatment.  The tech would explain to me what she was doing, and the radiologist, Dr Reece, was so kind and compassionate.  I saw a lot of the Radiology department, and I made the decision to be an x-ray tech from those trips.

The trips to and from the hospital were a really precious dad/daughter time for me and him.  Always, I  mean ALWAYS, we would stop at the Dairy Queen on north 9th on the way out of town.  Always, I mean ALWAYS, he would order a banana malt for me to drink on the way home.  He knew the way to his little girl’s heart was through her stomach.  ❤😍❤

Daddy didn’t want me to be an x-ray tech.  He wanted me to be a court reporter.  My spelling and typing skills did seem to make that a logical option.  But as it all turned out, he didn’t get a chance to be part of my decision.

Now that I’m 63,  wiser than I was in 1970… now I realize how very very difficult it must have been for my dad to think of letting me go, leaving me,  before his job as a Daddy was complete.  One day during my senior year I left school early to go home and care for him because he was very weak that day and Mom was at work.  When I walked in the back door I saw him sitting at the dining room table with his head in his hands.  Weeping.  I stood still, tears streaming down my cheeks too.  Not many words were spoken as we looked separate directions and cried.    The man I called Daddy, the man who could rig up a radio speaker so that he could hear the TV, the strong man who rescued me from the sticker patch, the man who took me to work with him in his big old Caterpillar road maintainer, the man who taught me to drive his stick shift 1948 Chevy pickup when I was 13, the man who let me help him with his woodworking shop, the man who was my best and only fishing partner.  The original man of my dreams was broken-hearted.  I couldn’t help him fix that.  Because I, too, was broken-hearted.

When I shared what had happened with Mom later on, she told me that it made Dad very sad to think he wouldn’t be able to finish raising me to adulthood.

His spot was empty at my high school music programs, high school graduation, wedding, and everything else forever.  Our daughter/dad time was cut short.  I’m married to a man he never met, the mother/grandmother of children he never met.

And I’m not the same little girl he last saw on his deathbed.  Honestly I was never really sure at the time that he loved me or was proud of me.  At 17, when I didn’t hear the words, I jumped to inaccurate conclusions.   I realize now that was just silly thinking on my part.  I realize now that he was very ill, and that changed everything about him.

Can I ask you to do yourself a favor?  If you think there is a chance your child or parent doesn’t know that you love them….. please, please tell them.   In fact, just tell them anyway, whether you think they need to hear it or not.  Because on that day when I came home from school and found him crying it was one of the last chances we had to say important things to each other before he passed away.  A perfect opportunity that we let slip away.  No second chances ever again.

My Abba Father has helped me work through my uncertainty of Dad’s love.  But oh how I would love to hear him say      “Bunny, I’m proud of you.  You’ve done well.”  I think he’d really like grown up Bunny. 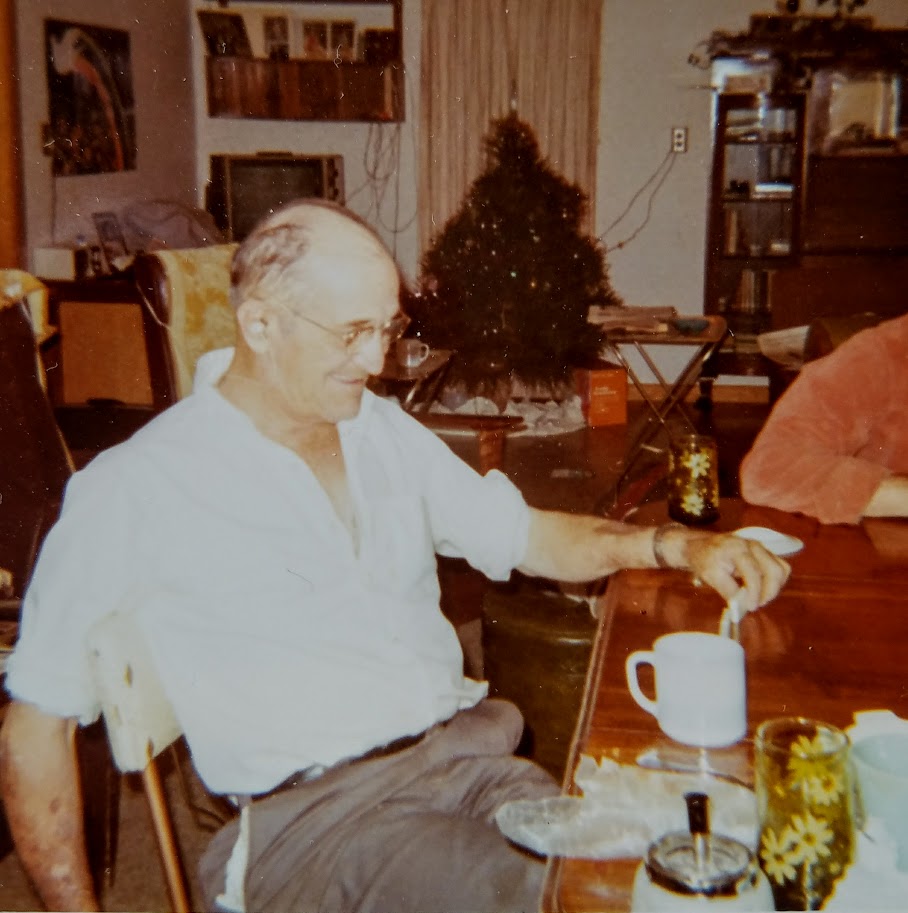 Benton and dominoes.  Always fun with Daddy. As long as you played the right domino.  😜