This past summer I accompanied my husband on a work trip to Seattle.  It seemed like the perfect opportunity to visit what I’d heard is one of the  most beautiful places on earth.

I heard correctly.  It is.  Beauty everywhere you drive.

But the truth is, I didn’t do any driving.  No wheels for this old chick.  The hubby had the rental car during the day so I was pretty much sequestered in the hotel which was in a lovely  area about 15 miles from his workplace.  And 15 miles equaled a 90 minute drive time for him to and from work.  Yes.  90 minutes for 15 miles.  Just one way.  It was a total of 180 minutes, THREE HOURS drive time each day for him.  Which served to extend my sequestered hotel time to approximately 12 hours each day.

So I took the opportunity to learn how to use Snapchat on my phone. Valuable skills.  Perhaps skills that will add depth and appeal to my resume.

Re: snapchat and this picture…. Just to clarify, there was no mini-bar in the hotel room.  And to further clarify, I don’t really drink.

No complaints with the no-car bit, my feet work and Lord knows I need to rise up out of my chair and use them more often.  So I did log a lot of steps during that week along the walking path near the hotel. Lots of beautiful scenery but zero stores or shops or even a Starbucks anywhere near the walking path.  Just office buildings and techie type work places everywhere.

After a couple days of taking ridiculous Snapchat pictures of myself and doing laundry and walking the same lovely path over and over, I decided to exercise the Uber app on my phone instead of my feet and get a ride to a quaint little shopping center a few miles away.  Sounded like a great way to spend several leisurely hours until the Mister got home from work.

Have you used Uber?  It’s an okay way to get a ride, though we found out it can be pricey depending on the time of day in Seattle.  Rush hour to our hotel from downtown Seattle one way?  $75.00  😲 But from the hotel to this little shopping area it was pretty reasonably priced.

Shortly after ordering a ride I found myself in a car with a very pleasant man whose language skills didn’t include fluent English.  And  me with my hearing deficit.  Delightful combination.  Plus he was new to the area and the route was complicated with road construction re-routes.  Imagine that.  It was a cumbersome trip and I was ecstatic to finally open the door and depart the car.  At the intended location, though the driver ended up dropping me off towards the back of the shopping center at the service/delivery entrance near the trash bins instead of the customer parking up front.  Why, you ask?  I have no earthly idea.  Language barrier.

Country Village, Bothell, Washington.  So quaint, so lovely, so many fun shops to stroll through.  I parted with quite a few coins but mainly I took photos because it was just so picturesque. 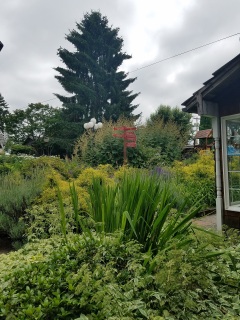 And I learned something about my new Samsung phone’s battery capacity.  It ain’t so very whippy when you’ve been taking one picture after another after another.  Then posting them on Facebook.  And using the battery-depleting Snapchat app.  And using the Uber app to summon a vehicle.  And using Google to find Country Village shops because your Uber driver doesn’t understand what you’re saying.

Why is battery life on my phone of any consequence to this story?  Because…. in order to return to my hotel I would have to use my Uber app on my phone to request another car.  And after only a little over  1 leisurely hour spent at Country Village I glanced at my phone to see the battery was down to 2% which meant it was on the verge of shutting down and leaving me stranded. Though I was nowhere near being done with my leisurely shopping trip,  I found it necessary to quickly order up an Uber car and then shut off my phone to try and preserve battery.

Then I stood out by the front of the shopping center at what I thought was the main entry road.  There were several different entry roads to choose from.  Which posed a problem.  I didn’t know which entrance the driver would select after the first Uber driver dumped me out at the service/delivery entrance.  I didn’t know what the car looked like because I’d shut down my dying phone before checking on the model/color of Uber car.  Or how long my expected wait would be.   And the driver couldn’t call me because my phone battery was dead and wouldn’t start back up.  And….if you aren’t where you’re supposed to be when Mr. Uber arrives, they leave and charge your card for the trip.   Oh.  My.  Word.

So there I stood, looking closely at every one of the many many cars that were driving by me.   No one showed any interest in looking at me.  I get that a lot.  😏  Finally I looked way across the parking area to the far entrance and thought I saw a white Prius driving slowly while the driver glanced here and there.  Typical Uber driver behavior.  But the distance between me and that car was substantial.  And I am not what you might call fleet of foot.  Long in the tooth, but not fleet of foot.  With no other real option, I did what I never do.  I ran after the car, which had now made it deep into the interior of the shopping center proper, even further from me.  Great.   Let’s be honest, no one who saw me at that moment would have defined what I was doing as “running”.  More like a panicky waddle.   Plus I was carrying more than a few bags of stuff I’d bought during my brief time shopping.

The driver of the white Prius eventually looked my way and motioned me to stop where I was.  I think the sight of my panicky waddle frightened him a bit or perhaps he was thinking “don’t make me use my CPR skills, lady”.  He then started to slowly drive toward me.  Sure enough, he was an Uber driver.  With the trademark lack of fluent English skills.  At that point I didn’t even care if I was the rider he was supposed to pick up.  I just got in his car and prayed that he’d take me to the hotel.  He looked at me and spoke words that I loosely interpreted as being my name.  Close enough anyway.

Made it to the hotel.  Very happy to open the door to our room, drop my bags on the floor, and flop into the closest chair.  Oh, and plug my phone into the charger.  The entire leisurely shopping adventure ended up whittling a mere 2.5 hours from my 12 hours of sequestration that day.  But it was an eventful 2.5 hours.

In response to the eventful experience I could have chosen to become more athletic,  working out and running marathons so that next time chasing an Uber car would have been easier.  Instead, I purchased an external battery type phone charger that fits easily in my purse.  No more dead phone batteries. Problem solved.