With Thanksgiving being last week, I spent a lot of time standing in my pantry, perusing the shelves for ingredients needed to make recipes that I only make once a year.  Not that I only use these individual ingredients once a year, but from the looks of the expiration dates on some of these items I clearly do not cook often enough.

Exhibit B:  Hershey’s Cocoa. Good grief.   I could sign it up for Antiques Road Show.  Would you throw this away?  It’s half full.  I think I made some brownies with it the other day actually.  And they all got eaten. Perhaps by me alone.  But I don’t really turn away any sweets based on quality.  Equal opportunity snacker. The bathroom scales agree with that statement. 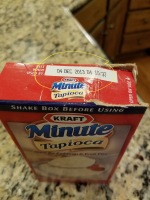 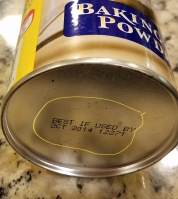 Exhibits C & D:  More evidence that I simply don’t cook much. Tapioca expired in 2013.  No part of my memory can dredge up what I might have used this for.  ??

Baking powder expired 2014. But it’s almost empty.  It’s going in the trash.  I have another container of baking powder in the pantry that still has a couple weeks to live.

If I were to take pictures of the spices in my spice rack you might see Roman numerals for expiration dates.  Do spices expire?  Seriously?  I’m not tossing any of them at this point.  No worries, I probably won’t ever use most of them anyway.  🙌  They fill up the empty spaces in my cool huge hanging spice rack and make it look like I’m an expert cook.  Clearly an illusion.

My final exhibit is one of 3 (THREE) large (LARGE) jars of Jif peanut butter.  It’s set to expire in August of 2018. The other two jars, same thing.  I can quite accurately predict that all three of these jars will be history in probably less than 2-3 weeks.   I consume approximately 1 tablespoon every 4 or 5 days. Tops.

But my beloved husband, bless his heart, is in love with the stuff.  Specifically, only JIF brand. No Skippy, for heaven’s sake. No off brands.  No Kroger.  No all natural organic freshly made right in front of his eyes peanut butter at some high dollar food store.  We’ve been married 42 years.  I’d like to think he’d choose me over PB but I wouldn’t actually bet money on it.  No biggie.

He eats insane amounts of peanut butter, and I look like a pathetic version of Mrs. Patmore from Downton Abbey when I cook.  It’s a match made in heaven.  And I’m planning on our match having a really long shelf life.  💕

3 thoughts on “Shelf Life — A look into my pantry. Brace yourself.”

Leave a Reply to Simply B Cancel reply