Unless you are blind, you are fully aware that my husband and I do not have athletic looking bodies.    No one looks at us and concludes that we must work out many hours each day.

We don’t look like we would be hikers.  We look like walking to the fridge is our exercise of choice.  (oddly enough, as I typed those words, the hubby strolled by from the fridge with a nice bowl of ice cream in his hand)

Believe it or not, we love to hike.  Don’t hyperventilate as you gasp in disbelief.  Most of the time the paths are level and easy.  Sometimes even paved.

And sometimes we bite off more than we can chew.  The most recent example of this happened in the state of Kansas.  Land of no mountains.  Land of few hills.  The plains.

We were camping at Kanopolis Lake for the first time.  Wow it’s such a beautiful area.  Camping is great there, and we were pretty excited to read that there are hiking trails.  Even kind of well-known hiking trails.  Horsethief Canyon and Buffalo Track Canyon trails piqued our interest.

As we’ve been known to do, we went without a printed map.  There were none in the kiosks leading to that area.  But, hey, it’s Kansas.  How difficult could it be to walk across a flat portion of land and find our way back to the parking area?

Our first mistake was thinking that Horsethief Canyon was the shorter of the two trails, just a 2 mile round trip dealio.  We parked in the gravel parking lot next to the sign for Horsethief and headed out.  Quickly we hit a fork  in the trail.  Signage was marginal, kind of color coded.  Which would require a map to decipher.  A map would have been nice for sure.  I brought up All Trails app on my phone.   There was a squiggly lined path that intersected another squiggly lined path.  No color coding.  No words, either.  Oh happy day.  The app even indicates that the trail is 1.9 miles.  Liar, liar, All Trails app. 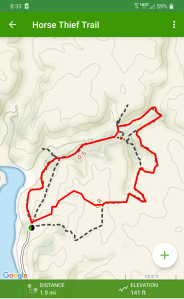 clear as mud to decipher this map

After some mostly amicable conversation, we agreed on which direction to go and ended up seeing some beautiful scenery.  Really beautiful!  Lots of wildflowers, a couple snakes, a lizard or two.  As we tromped on we came to another parking lot that was paved and looked way nicer.  It was the Buffalo Canyon parking area right by the lake.  Hmmmm.  Were we even on the right trail?

At this point we again were faced with a decision, a choice of three different paths this time.   I can’t say we came to a quick agreement on which path to take.  I can’t say the conversation was pretty, but it wasn’t profane either.  And I don’t even remember which of us decided to go “this way”, but after about .25 mile of the decided path, we ended up here:

And I need to inform you that I’d been experiencing some knee pain for a few weeks.  Hiking was exacerbating that issue.   However, we had remembered to bring our trusty Cabelas hiking sticks.  That’s what real hikers, the muscular athletic type mountain climbers, use.  In our case anyone who might cross our paths would probably look at us, look at the sticks and think “canes, these old people are using canes.”  Hmmmph.

Happily, no one else was hiking that day.  It was early in the hiking season and we seemingly had the place to ourselves.

After probably another half mile we entered into an area where paths were not marked clearly at all.  We backtracked a couple times on dead ends and finally ended up on a narrow trail into a dark wooded section above a stream.  It descended into this area, where we daintily stepped across mud to the path leading back up to parts unknown.

The path got narrower, and at one point water on the trail forced us to walk on a ledge of rock not a lot wider than our two shoes, clinging to a rock wall, through a very dark path which led to the area in the picture below.   As you can see, the path had become really subtle.  Practically indiscernible.  But it was a nice view up above our heads.

We came to a sign with a number on it.  Hmmm.  Without a map there was no telling what the sign was indicating.  And the path had pretty much ended.  We’d reached this:

A cave.  With no exit but up through the top.

At this point the old woman with sore knees (me) started to ponder what life would be like there in that lovely cave.  Because the only way out seemed to be the way we had entered.  Another backtrack.  Through mud and across narrow ledges.  Life in the cave didn’t look so bad right then.  Dry ground, nice cool temps, shelter from rain.  And no one would hear me whining.

Backtrack was our only option and eventually we did find an alternate way to navigate our old bodies to the top of cave area.  It was a slow climb.  I could hear voices.  Afraid that I was losing my mind, I didn’t ask hubby if he could hear voices, too.

At the top of the cave area we found a well-defined trail, offering so many options for which way to go.  By this time I was in full out whine mode and moving at the speed of a cow with a broken leg.  As we stood there arguing about which way to go, the voices became louder.  We stood there for awhile, resting on our hiking sticks, and drinking water from bottles we’d brought in our hiking backpacks. As the voices neared, I stood up straighter, stopped the whining,  and attempted to achieve a strong athletic hiker appearance.  Truly an exercise in futility.   The voices were climbing straight up out of the cave and we were certain that young buff hikers would appear once they reached the top.

It was a man and woman probably the same age as us.  The man was wearing regular old jeans, a Tshirt, and cowboy boots.  He was smoking a cigarette.  The woman had on a tight tank top and very short cut off jean shorts and flip flops.  They were both thin and tanned and clearly not in any physical distress despite the steep climb from cave.  No hiking poles, no back packs, no bottled water.  Yes.  They had climbed straight up out of that cave.    We greeted them and offered them a bottle of water.  The woman showed me her large foam disposable cup and straw and said, “Nah, we have fluids.”  Fluids.  That’s a rather vague description. Whatever.

After a pleasant chat we parted ways with them.  We went on our way, the wrong way of course, and were forced to backtrack AGAIN.

Two mile hike?  Hardly.  More like 6 or 7 by the time you add up all the backtracking.

I didn’t ever reach the parking lot where we’d parked.  The trail we chose eventually led us to a paved park road and I was done hiking.  Period.   The Mr.  left me standing on my one good leg under a very small shade tree while he walked the paved road in the assumed direction that would lead to the parking lot.   I stood there alone and sort of  wondered if this was where my life would end.  At least cars drove by now and then.  I probably wouldn’t be eaten by vultures or coyotes before someone found me alongside the road.  😜🤪😨

The relief was significant as we pulled back into the campground and went back into our RV.  AC and a comfy recliner welcomed us with open arms.

Here’s the truth, though… I’d hike there again.  My knee is fine now, and we’ve hiked in Colorado since this Kansas hike with no problem.   Kanopolis is absolutely beautiful.  We found a printed map at a kiosk the next day.   Next time, we’ll be prepared and maybe remember which trails lead where.  Lord knows we saw them all.

Shadow of me taking a picture of the cave we’d just been down inside.

one of the easier streams to cross. 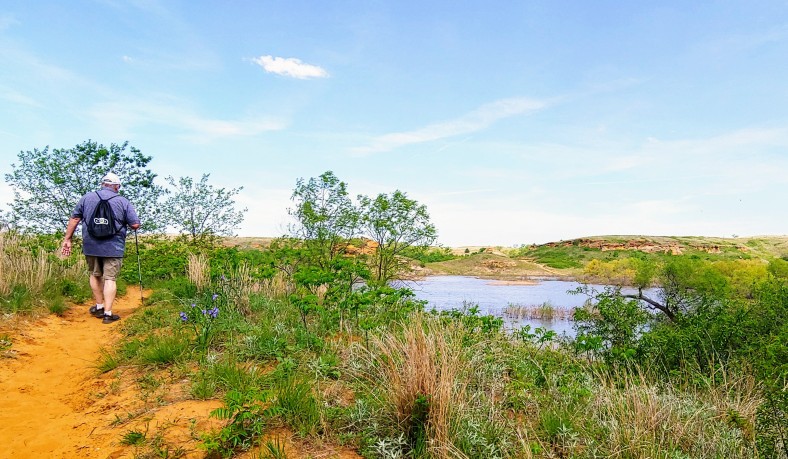 Which of these trails gets us back to the parking lot?  The paved road is in the distance right mid picture.  I was beyond exhausted by this point.  But, seriously, isn’t this beautiful??

One thought on “Would you like some whine with that cane?”